Protect Your Trees From the Emerald Ash Borer!

Learn About The Emerald Ash Borer

The emerald ash borer infestations are nearly identical to those we often see on ash that are infested or infected by other pests and diseases commonly found in Vermont. If your trees are an asset in your landscape contact us.
Learn More About the Borer

Get Your Ash Trees Protected

We're prepared to provide you with a NO-OBLIGATION ash tree inspection and service quotation. You can depend on M.J. Cullen and Ash Tree Medics to help save your ash trees.
Get a FREE Quote

Why Should I Protect My Ash Trees?

With thousands of ash trees destroyed across North America since 2002, the need for an effective emerald ash borer treatment is more pressing than ever. There are roughly seven billion ash trees across North America and these trees are one of the dominant species in our forests and urban and suburban canopies. The speed with which emerald ash borers breed, feed and spread places our entire population of ash trees under threat.

What Is the Emerald Ash Borer?

Agrilus planipennus, commonly known as the emerald ash borer, is a kind of beetle that is native to northeastern Asia and, as its name suggests, feeds exclusively on ash trees. It was found in North America only in 2002 and there was very little research into its life cycle and habits up to that time. Outside of its native range, it is a highly destructive pest and has resulted in the near decimation of large numbers of ash trees throughout North America and Europe. Much of the research being done today is funded by local, state, and provincial governments on the continent, with a view to containing the insect’s spread and preventing further destruction of the native ash population. Although we identify the species by its adult form, it is actually the larvae that cause the damage. 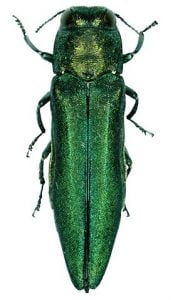 The emerald ash borer has a distinctive, even beautiful, jewel-like appearance. Adult beetles are about  half an inch in length and very thin. They have an unmistakable metallic green

color with some copper hues. When the wings and elytra (the hard outer wing) are spread, the bright red of the beetle’s abdomen becomes visible. Despite their very distinctive appearance, there is still a tendency for adults of other species to be misidentified as emerald ash borers.

Can Damage by the Emerald Ash Borer be Prevented?

As a result of all the research that has gone into this species and its life cycles and habits, preventative treatments have been developed that have proven very effective in keeping ash trees safe from infestation. These should be applied by professionals as there are many factors to be considered. The health of the tree needs to be assessed to see whether it can effectively be preserved. In some cases, the infestation may be too far gone. Ash trees that have not yet been infested, or those where the infestation has not developed too far, can be treated with a variety of preventative measures. These include soil injection, trunk injection, bark spray and canopy spray. The injection methods are the most common, as they deliver the product directly into the tissue of the tree, allowing them to then be spread throughout the canopy by the tree’s natural transpiration movements. If you are concerned about ash borer infestation, call a professional immediately to assess your trees.

How Can I Get Rid of the Emerald Ash Borer?

The most common way to control emerald ash borer is by means of the soil or trunk injection methods mentioned above. Diluted insecticides, which are selected for being non-toxic to the trees, are injected into the soil of the trunk and are then spread throughout the plant in its water supply. As the larvae feed on the bark and phloem tissues, they consume the insecticide and die. The majority of chemicals that are used for this are not approved for use by homeowners, and need to be administered by professional pest control services.
Learn More About the Borer

How Does the Ash Tree Medic Help Save Your Ash Trees?

M.J. Cullen uses Arbor Jet products. Arborjet's products are ranked #1 in University studies and have gained respect from arborists and landscape professionals worldwide. Property owners are asking for Arborjet service providers that can offer tree injection as a safer treatment alternative to spraying or soil drenching. 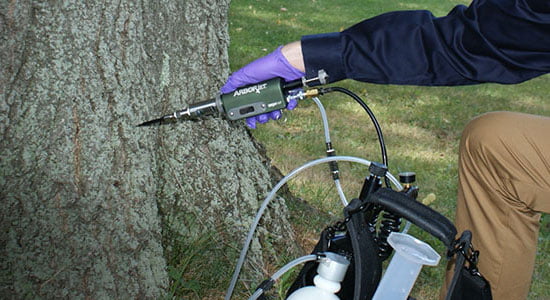 Simple and Quick: The Arborjet drill-plug-inject method is easy to learn and the application is quick. The Arborjet system can be used for high production treatments.

Environmentally Safe: Unlike spraying or soil drenching, Arborjet's closed system injects directly into the tree, protecting your customers, the applicator, and the environment.

We have 23 Ash trees on our property in Chili. Mike (The Ash Tree Medic) injected them all in 2010, and many again in 2014. None of our trees have shown signs of being infected and they are all alive and healthy. A few of our neighbors also treated their trees, but some did not. Most of the untreated trees are dead or dying. Our local area is heavily infested with the ash-borer. The first indication that a tree is infested is significant visible woodpecker damage. We have none of that. We will treat them all again this spring. Drive by and see our trees this summer.
John and Martha Hannon

Mike service and attention to detail is why we have his service to take care of our lawn for over 10 years. Always reliable and a wealth of knowledge of lawn care.
Dave Witzel